Veteran actor, Kojo Dadson, who seems to be recovering from his battle with stroke, has revealed how he has struggled over the past eight years.

Mr Dadson was paralysed and confined to a wheel chair after he was first diagnosed in 2012.

In a new video sighted online, the actor of ‘Home sweet Home’ fame was captured in a recovery process as he tried to move with the aid of a walking stick.

According to the actor, doctors advised he comes for therapies twice a week but he is unable to meet the appointments due to financial constraints.

“I always have to hire a taxi and go to the Mab Hospital but sometimes I go once or don’t go at all since I’m unable to pay the GH¢ 150 as transportation,” he said.

He is, thus, appealing for support to ensure his full recovery. 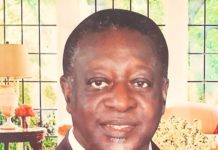 Tears as actor Kojo Dadson is laid to rest [Video]