Legendary artiste and dancer, Slim Busterr, has adjudged himself the most handsome Ghanaian artiste in his prime.

Still maintaining his well-built physique and light skin, the musician feels he is ahead of his counterparts, both young and old.

He opined that Ghanaian artistes think he makes such comments from envy, but to him, that is the reality no one can change.

He is, however, not denying the fact that some artistes have the potential to look attractive at their old age, but until then, Slim Busterr believes he still reigns.

During the early 2000s when he was an A-listed artiste among the likes of Daddy Lumba, the artiste, born Ebenezer Asare, was a ladies’ man.

His looks coupled with his irresistible dance moves won the hearts of many Ghanaians, typically females.

Currently, he is based in the United Kingdom and has put his music on hold. 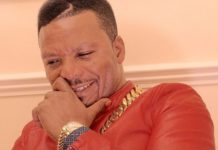