A 41-year-old man, Anthony Okyere, alias Elder Anthony, has been accused of murdering his nine-year-old son at Nobekwa near Kukuom in the Asunafo South District of Ahafo Region.

Mr Okyere, a taxi driver, is also accused of throwing his son’s body into the Tano River after the alleged murder.

The victim is said to be a primary three pupil at Nobekwa.

He added that Mr Okyere is assisting with investigations at the police station.

Residents told Adom News’ Sulley Dramani that the news was shocking since the father had a very cordial relationship with his now-deceased son.

The residents have appealed to the police to thoroughly investigate the matter and bring justice to the victim’s mother and family. 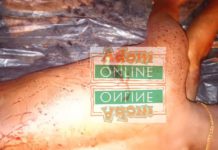