A 46-year-old woman, Patricia Oduro, narrowly escaped death when her female friend, Ama Bono allegedly beat and slashed her for demanding some GH¢ 3,000.00 she saved with her.

According to reports, madam Oduro, who traveled to Wassa Japa in the Amenfi East District of the Western Region, wanted to start a business and also to rent an apartment.

She is said to have met Miss Bono who promised to help her start a mining investment with GHS 3,000.00 capital, for a huge interest.

However, their relationship turned sour when she approached Miss Bono for the money to accomplish the motive behind her savings but it proved futile.

On that fateful day, Miss Bono is reported to have allegedly invited madam Oduro to the farm where she ended up hitting her severally with a stick from behind and slashed her with machete.

Narrating her ordeal after surviving the almost fatal attack, madam Oduro disclosed the accused plainly told her she was paying for the sole crime of demanding for her money.

She said after several strikes, she faked her death when Miss Bono passed her hand around her nose to ensure she was dead.

Satisfied her act had been carried out, she left madam Oduro in the bush and headed home.

It was later the next day that some residents discovered madam Oduro groaning in pain and alerted the police.

Miss Bono was subsequently arrested and remanded for two weeks. 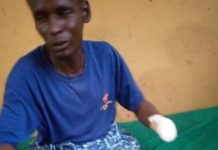