Six persons have been burnt beyond recognition in a ghastly accident at Akomadan in the Offinso North District of the Ashanti Region.

The accident reportedly occurred in the early hours of Tuesday, November 2, 2021.

It involved a passenger bus with registration number GT 4215-17 travelling from Techiman in the Bono East Region and a Kia Rhino towing car with the number GT 6983 – 12.

The bus is said to have gone up in flames following a crash.

The Akomadan District Police Commander, DSP Gyasi Agyemang, confirmed the incident in an interview with Adomonline.com.

According to him, 22 others also sustained minor injuries.

DSP Agyemang explained the victims have been rushed to the Akomadan Government Hospital with rescue efforts still ongoing.

The accident comes barely 24 hours after 17 persons mainly Kayeyeis died in an accident at Offinso-Abofour in the region on Monday, November 1, 2021.

According to the Offinso Motor Traffic and Transport Department, a Sprinter bus heading towards the northern part of the country collided with a trailer from the opposite direction. 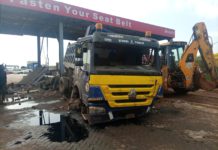 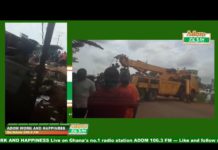