A 32-year-old  shoemaker, Kweku Baffoe and his wife, Rosina Arthur, have been found dead in their room on Thursday at Wuonsom, a suburb of Effutu Municipality in the Central region.

Sources revealed that the couple died at midnight in their chamber and hall building. The wife was found in the kitchen floor with foam formed around her mouth and the husband hanging from the kitchen ceiling.

Speaking to Adom News, father of the deceased, Kojo Baffoe, said his son was going through certain issues over which he advised him. He declined to disclose the issues to Adom News.

According to the father, one of the apprentices of his deceased son whose name was given as Kwesi Peter, came for the keys to the shop and with no response to his numerous calls to his master, he, together with the apprentice, decided to break into the room.

And on breaking into the room, they found the lifeless bodies of the couple.

Speaking also to Adom News, the apprentice of the deceased said he worked with his master till 7:30 pm on the day prior to his death and there was nothing that showed he was bothered or worried about something.

He added that they even shared some jokes and so was really shocked to hear about the death of his master.

The bodies of the couple have been conveyed to the Winneba Trauma and Specialist Hospital by the Winneba District Police Command. 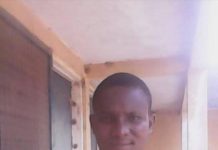