Dancehall musician, Shatta Wale, joined a conversation on Hitz FM where one of his SM Militants, Joint 77 was present for an interview and things got escalated after Andy Dosty queried both parties.

The heated atmosphere emerged after Shatta Wale felt Joint 77 wasn’t telling the truth as to why he sacked him from his camp since January.

According to Shatta Wale, his SM Militants, made up of Addy Self, Captan, Joint 77 and Natty Lee wrote none of the songs he featured them on to attain the limelight.

He added that, the SM Militants were too lazy, hence he had parted ways with them for good.

But in an interview on Daybreak Hitz, Joint 77 said he also wrote some of the songs, adding that, he co-wrote the song with Shatta Wale before the other Militants gave their verses.

Joint 77 further added that, after Shatta Wale sacked him, he had been trying to apologise through some big men but Shatta has never listened to him.

The assertion didn’t go down well with Shatta Wale. He told Andy Dosty the main reason he sacked Joint 77 was because music wasn’t his thing.

Meanwhile, in a back and forth in the Hitz FM studio, Shatta Wale said many things he had done for them and Joint 77 was also given ample time to explain his side of the story.

At the end, Shatta Wale made the public aware that though Joint 77 has left his camp, he is bonded to a lifetime contract, hence can’t be managed by any other record label.

Joint 77 on the other hand disagreed and said he didn’t sack himself, hence he believes the contract got “terminated” the day Shatta Wale went live on Facebook to make Ghanaians aware that the SM Militants were no longer part of his brand. 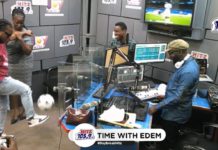