Dancehall artiste, Shatta Wale and his ‘boys’, caused a scene when they had physical and verbal altercation with an engineer at an ongoing road construction site at Adjiringanor in Accra.

Reports indicate the brawl followed the refusal of the worker to extend the construction to his office.

A video from the site captured the musician, born Charles Nii Armah and his gang, in a fierce tussle with the workers.

In the video, disgruntled Shatta Wale was spotted in a white singlet over blue jeans with timberland boots and white beanie to complement his outfit.

There were a number of motorbikes parked at the scene and all efforts to calm Shatta Wale and his ‘boys’ proved futile. 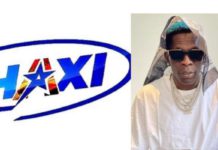 Check out Shatta Wale’s outfit as he launches Shaxi rider