Rapper Sarkodie has finally opened up after he was given a fake United Nations (UN) award by self-acclaimed diplomat and global ambassador, ‘Dr’ Kwame Owusu Fordjour also known as Dr UN.

According to the musician, he thought he was smart but he was given an empty bottle as an award; a gesture that he cannot easily erase from his memory.

He further described the whole saga as a bad situation because he wasted his precious time over a scammer.

I thought I was a hard guy until Dr UN gave me an empty bottle as an award. Anyway that was a bad situation.

The day I will meet him unless I smack him. If I calculate the time I have wasted with him, I could have been making love to Tracy [SIC].

Sarkodie and other industry players received the fake Global Excellence in Leadership Awards for their contribution to Ghanaian music and culture as well as their capacities as role models for the country’s young people.

Few days after they were honoured, it came to light that it was never affliated to the UN.

They were trolled on social media and it got worse when ‘Dr’ Fordjour started granting interviews to brag about his scamming achievement. 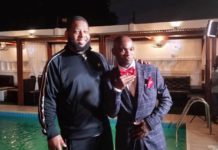