The final funeral rites of the District Chief Executive (DCE) for Guan District in the Oti Region, Marlon Anipa, has been held.

The solemn ceremony came off on Saturday at the Akpafu Senior High Technical School on the Hohoe-Jasikan Highway in the Oti Region.

This was after a burial service at the Akpafu Sectech premises and later he was interred at Akpafu Todzi.

A thanksgiving service will be held in his honour on Sunday, February 27, 2022, at the Evangelical Presby Church, Ghana.

His demise occurred on Tuesday morning November 16, 2021, after a short illness.

Mr Anipa, who was the first DCE for the newly created district, had served for just 11 days. 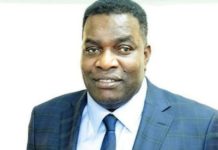