A robbery suspect has been shot dead with another arrested by the Central East Regional Police Command in the Central Region.

One of the suspects reportedly bit a policeman during the operation held at Gomoa Buduburam Zone 11.

The deceased suspect has been identified as Kwame.

Police sources said the operation was in connection with a Mobile Money (MoMo) vendor who was robbed and shot at a public toilet in the area.

In an interview with Adom News, eyewitnesses said the deceased suspect failed to surrender after some of the policemen told him to comply.

Kwame was shot in an attempt to flee the scene.

The MoMo vendor, brother Michael, was rushed to the Winneba Trauma and Specialist Hospital after the incident where he died while on admission. 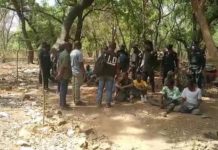