Founder and leader of Glorious Wave Church International, Prophet Emmanuel Badu Kobi has said 2018 will not be a good year for Ghana.
He explained that, many disasters including mysterious deaths of children will plague the country.
Prophet Badu Kobi made this revelation in an interview with host Ohemaa Woyeje on Adom FM’s ‘Work and Happiness’ on Monday.
During the end of every year, most of the famous pastors across the country prophesy into the New Year revealing happenings likely to affect the nation.
Among his seventy-six (76) prophecies, Prophet Badu Kobi stressed that, in 2018, a lot of workers would lose their jobs, well-established companies will collapse and there would be difficulties in various educational institutions.
He continued that, there would be a sudden decline in the progress of the economy which will render a lot of people striving to survive.
“In 2018, Ghana will be hard. People will lose their jobs. A lot of companies will die. School issues will emerge. This is out of 76 prophecies I have to say…” he predicted.
He meanwhile pleaded with God to prevent such disasters from happening in the country.
He said, ‘I pray God smiles onto the nation. He should bless us and give us his glory always.’
Nevertheless, Prophet Badu Kobi indicated that, the rest of the prophecies will be revealed during his 31st watch night service at the Glorious Wave Church International.
See the video below: 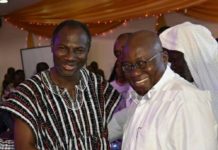 Hot audio: '2018 will be a difficult year for Akufo-Addo'