The crime of the veteran journalist, he claimed, was being very critical of the erstwhile Rawlings’ regime.

Riad Hosiefe said out of anger, he, together with some soldiers, planned to kill Mr Baako for calling the President a “bastard”.

But strangely, he said the late Rawlings heard about their plot and warned them to rescind their decision.

“Rawlings said if anything should happen to Kweku Baako, he will hold us responsible so we stopped. Kwaku Baako owes his life to Rawlings,” Mr Hosiefe claimed.

He said he is making this known to show the soft side of the late Rawlings.

Mr Hosiefe, who has been a friend to Mr Rawlings for close to 50 years, said Ghana has lost a great gem. 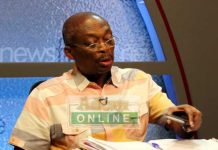