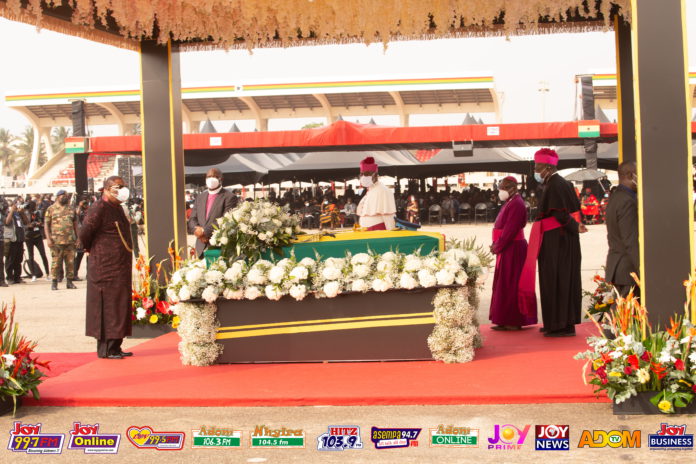 The Anlo Traditional Council has blamed the Chairman of late Rawlings’ Funeral Planning Committee, James Victor Gbeho for failing to do the right thing as far as Anlo tradition was concerned.

Secretary to the Local Funeral Planning Committee, Torgbui Agbotadua Kumasah, who spoke on behalf of the Committee said Mr Gbeho is a kin of Anlo who was expected to know and provide guidance to the state regarding Anlo tradition but he failed to do so.

He said Mr Gbeho’s failure in providing the state with the right guidance meant the people of Anlo could not perform the needed traditional rites prior to the state burial given to Mr Rawlings who was an installed chief of the Anlo land.

Torgbui Agbotadua was particularly unhappy with comments Mr Gbeho was alleged to have made to the effect that the late Mr Rawlings was just a ceremonial chief, an assertion he said isn’t accurate.

He explained that the late Mr Rawlings was the advisor to the Awomefia of Anlo State and couldn’t be described as a ceremonial chief.

Torgbui Agbotadua who spoke on Adom 106.3 FM morning show, Dwaso Nsem, Thursday, however, stopped short of blaming government for its role in the happenings, saying it had the duty to perform a state funeral and that it did.

The remains of former president Jerry John Rawlings was laid to rest on January 27, 2021, in Accra amid concerns from the family regarding its role and adequate input.

The family, prior to the burial, had announced plans to hold a traditional funeral with the hope of the body being sent to Anlo, a hope that remained against hope.

But, Torgbe Agbotadua served notice on the show that they were still going to organise a traditional funeral where they will perform the necessary rites as Anlo tradition demanded.

Listen to the audio below for more of Torgbui Agbotadua’s interview with Dwaso Nsem host, CJ Forson: