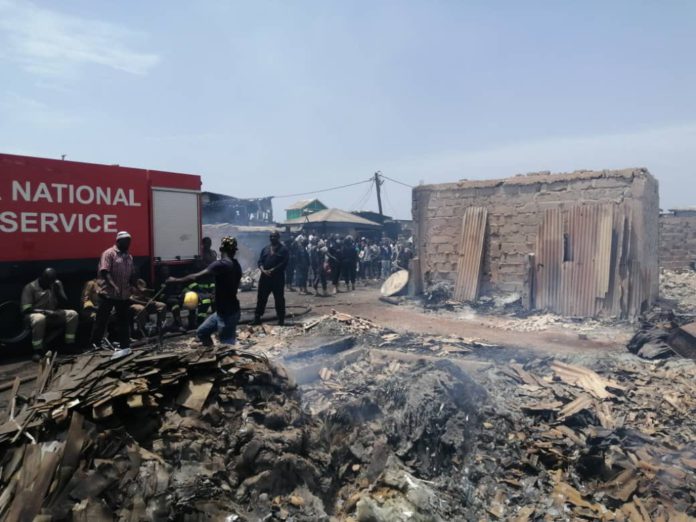 The Ashaiman Divisional Police Command has taken over a suspected arson case in which three children were burnt beyond recognition at Katamanso No. 2 in the Kpone-Katamanso Municipality.

Three others, who sustained various degrees of injuries, included husband, Simon Addo with his wife, Pat Amoah and a child. They are receiving treatment.

The incident, which occurred early hours of Friday, has sent shock waves to neighbours and persons close to the family.

The case initially under Zenu-Atadeka District Command has been transferred to the Ashaiman Division.

A neighbour, Georgina Akakpo, in an interview said she was yet to come to terms with how the family was set on fire.

“I was in disbelief after waking up to see the building in flames. The man in question left the lady and the children in there.

“He claimed he was calling the fire service but has since not stepped a foot here,” she claimed.

Some neighbours forced their way into the building to rescue the victims but only Madam Amoah and one of the children, both severely injured made it out of the fire.

Police from Zenu-Atadeka district, led by District Commander Supt. Abdulai Mumuni, have taken up the matter.

Police intelligence led a team to the Tema Port Clinic where Mr Addo was receiving treatment.

There, police were told to allow Mr Addo, who was equally injured, to respond to treatment.

Saturday after the incident, health officials at the clinic told the police Mr Addo’s condition was deteriorating.

By Sunday, it had become necessary to refer him to the Korle-Bu Teaching Hospital for further treatment.

Checks at Katamanso Timber Market revealed all five shops belonging to Madam Amoah had been closed.

According to him, a lot of questions need to be answered in the course of investigations.

Meanwhile, Madam Amoah and one of the children are receiving treatment at Tema General Hospital.