The Volta Regional Police Command has arrested 17 suspects with narcotics substances in separate operations conducted across the region.

Some 13 of them were arrested on February 3, 2022, in an hour operation at Juapong upon intelligence.

Five assorted motorbikes abandoned at the ghettos were also impounded.

Three suspects including a woman were on February 2, 2022, arrested by the Dzodze District Police in a similar exercise, and quantities of narcotics substances were also retrieved.

The operation was led by the Dzodze District Police Commander, DSP Christian.

In all, 281 wraps of substances suspected to be Indian hemp and assorted narcotics induced preparations; 622 pieces of toffee, bitters, and other implements used in processing narcotics substances; rolling paper; (Rizla) pairs of scissors, brown paper, and Lighters were retrieved from the suspects.

At the Abutiakope beach at Keta, a 59-year-old man was arrested and in custody after his attempt to escape arrest failed when they were swooped on.

His accomplices managed to escape in a fishing boat at the Abutiakope beach abandoning two sacks of narcotic substances and a Pajero SUV yesterday February 3, 2022.
The Keta District Command is following other leads to get those who escaped arrested.

Meanwhile, all 17 suspects will be screened and those found culpable after the investigation will be put before the court. 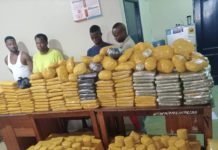