A female shoplifter was left with no option than to plead for forgiveness after she was caught red-handed stealing.

The Nigerian woman, who spoke in Yoruba dialect, was facing embarrassment for stealing a fabric she hid in her handbag.

Narrating the incident in a video that has since gone viral, the shop owner stated that the customer’s suspicious activities caught her attention, hence she decided to pay close watch of her.

She also ordered for the CCTV surveillance to be zoomed in on her. Lo and behold, she was caught folding and hiding one of the fabrics on sale into her bag.

As she made it to the exit, the shop owner said she was stopped and searched and the item was retrieved.

Fearing her identity will be revealed to the public, the shoplifter could be heard pleading not to be disgraced but the obviously angry shop owner was not giving her any mind.

A post shared by The Tattle Room 🇳🇬 🌎 (@thetattleroomng) 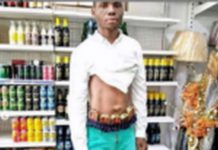 Check how ‘strategic’ thief was nabbed inside supermarket