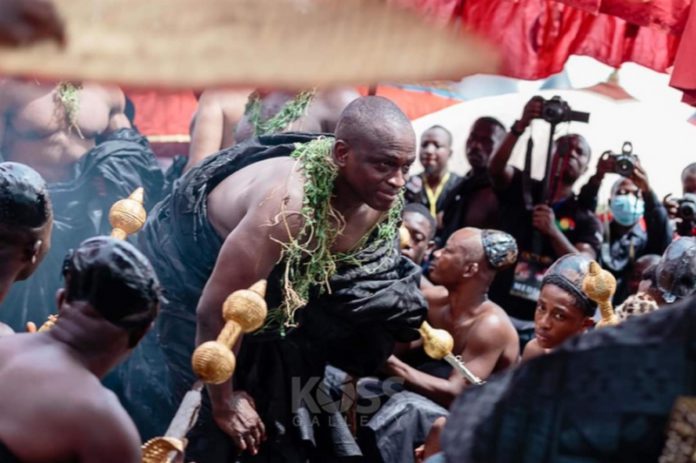 One of the royal gates of the Yiadom-Hwedie family of Old and New Juaben has kicked against the planned swearing-in of John Gyamfi, the paramount chief nominee for the traditional area.

According to Nana Yaa Duwaa’s gate, the Juabehene, Daasebre Otuo Serebuor, blatantly disregarded their gate in the nomination of a valid candidate to fill the position after the demise of Daasebre Oti Boateng, the paramount chief.

The release said the Counsel for the Duwaa gate has been unsuccessful in getting the Registrar to serve the respondents after filing an ex parte motion for substituted service on June 13, the Petition and the injunction application.

“The Counsel for the Petitioners filed a motion ex parte for substituted service on the 13th June 2022 at the Registry of the House of Chiefs in order to bring to the attention of Nana Otuo Serebuor II, Omanhene of Juaben Traditional Area, and the Chairman of the Counsel of State, Nana Akosua Akyamaa III, Queen Mother of Juaben Traditional Area and John Gyamfi, the nominated candidate the Petition and the injunction application.

“This became imperative after the bailiff attached to the Judicial Committee of the Eastern Regional House of Chiefs had made an attempt to effect service on them three times but was unsuccessful.

“The Motion Ex Parte for Substituted Service filed on the 13th June 2022 is suffering a setback due to the predisposition of the House to unduly delay the process as portrayed by the Registrar of the House with an indicting claim to the petitioners that there are no funds to organize a general meeting that will constitute the Judicial Committee to sit on the motion on the substituted service,” the release said.

According to him, the House is yet to consult the Chief of Staff of the office of the President for funds to be released for that purpose. “It appears as if the House as portrayed by the Registrar is dragging its feet and will not allow service to be effected on the Respondents until the nominee is enstooled.”

Members of the Nana Yaa Duwaa’s Gate of the Yiadom-Hwedie Royal Family of the Oyoko clan of the Old and New Juaben traditional areas in the Ashanti and Eastern regions sought the Judicial Committee of the Eastern Regional House of Chiefs to place an interlocutory injunction to restrain the newly-enstooled Omanehene of New Juaben and his assigns from holding themselves as traditional rulers of the area.

However, the kingmakers in the New Juaben Traditional Area went ahead to outdoor John Gyamfi as the paramount chief-elect.

The new chief of the New-Juaben Traditional Area is currently undergoing initiation for 40 days in line with the customs of the area.

He will, in the process, choose a stool name before he officially swears the oath of allegiance.