The manager of Kumi Guitar, Nana Poku Ashis says no one can end the career of his artiste.
Kumi Guitar has released a song addressing the recent Zylofon-Stonebwoy fracas which happened over the weekend.

ALSO READ: Knowing when you will die is best thing ever – Counsellor Lutterodt
He took aim at Stonebwoy for releasing a song against their record label Zylofon media. He accused Stonebwoy of being ungrateful after all the label had done for him.
Some people have suggested that Kumi Guitar’s career has a shorter life span because they believe he isn’t at the same level with the award-winning BET dancehall musician to attack him.
READ: Kumawood movie industry is ‘dead’ – Nana Ama Mcbrown
But responding to the critics, Nana Poku said “only God can terminate the career of Kumi Guitar. If a song is good, people will eventually dance to it”.
He further urged industry players to support investors who wants to push the creative arts sector up the ladder. 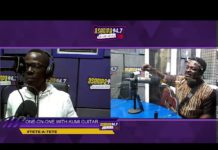