One person has been confirmed dead with four others in critical condition after a Toyota Camry ran into a drinking spot at Awutu Obrachire in the Awutu Senya West District of the Central Region.

Reports indicate the unregistered vehicle with DV number DP47218- 2022 had three occupants including the driver onboard.

They were said to be traveling from Awutu Bereku to Obrachie when the accident occurred on Saturday.

Upon reaching a section of the road, the driver reportedly lost control, veered off the road and crashed into the spot which had several patrons there.

The victims according to witnesses who spoke to Adom News’ Kofi Adjei have been rushed to the Awutu Bawjiase Polyclinic. 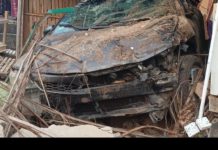