Another victim of an accident which happened at Awutu Obrachire has been confirmed dead.

The police, in a latest update, confirmed the 14-year-old boy died as all efforts to resuscitate and get him respond to medical treatment failed.

He was referred to the Trauma unit of the Bawjiase Polyclinic where he succumbed to his injuries shorty after.

Mr Quaye added that doctors disclosed he had an internal head injury after he was stuck under the car for a while.

His body has been deposited at the Kodua mortuary.

This raises the death toll to two and injured, 3.

A seven-year-old boy died on the spot after the unregistered Toyota Camry DP, 47218-2022 veered into a drinking spot at Awutu Obrachire.

The driver, carrying two other passengers, is said to have lost control and veered off the road. 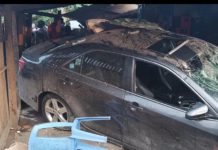 One dead, others in critical condition after vehicle runs into drinking spot [photos]