Some angry Saboba Constituency supporters of the New Patriotic Party (NPP) in the Northern region have locked up the party office and vandalised property.

The angry supporters burnt tyres at the constituency office and broke louvre blades of the office in their protest on Saturday morning.

Their action follows the disqualification of one Emanuel Mawanye Kotin from the parliamentary race.

A spokesperson for the group, Oyal Addae, speaking in an interview with Adom News, accused the Defence Minister, Dominic Nitiwul of being behind the disqualification.

“We are aware of the personal interest of Dominic Nitiwul, who says he can control Bimbilla and Saboba by winning both for NPP,” he alleged.

The irate group, who believed the basis for the disqualification was not justified, is seeking the reinstatement of Mr Kotin within the next three days.

They have threatened to set the constituency party office ablaze after the three days if the party executives continue with their decision, adding that the party should forget about winning the seat in the upcoming elections. 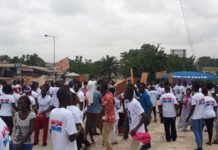 I will never be on social media – Juventus coach

Sex at least once a week can help you live longer...