A staff of Newmont Gold Ghana Limited, Daniel Asiedu Akrofi, has died after his car rammed into a stationary truck near Sunyani Technical University.

The deceased, driving a Toyota Camry with registration number GR 258-18, was heading to work at Kenyase in Ahafo region when the incident happened on Wednesday morning.

The parked truck, a Kia Rhino with registration number AW 7461-14, loaded with pipes, broke down last night but there was no warning triangle to alert oncoming vehicles.

According to witnesses, the deceased was speeding.

Speaking with the Adom News, the Operations officer of Bono regional office of the Ghana National Fire Service, Ignatius Noekor, said poor driver training and licensing are to blame for road accidents.

He noted with concern that some drivers “behave as if they operate with their own laws of physics, which unfortunately lead to the loss of innocent lives in preventable accidents.”

The fire officer said the rate of road accidents in the country, must be of grave concern to all Ghanaians.

“The Driver and Vehicle Licensing Authority cannot be entirely blamed, I suggest that licenses of drivers who are involved in accidents must be authenticated to ascertain their qualifications to drive,” he added.

The fire officer also urged the Motor Traffic and Transport Department and other vehicle regulatory bodies to sit up and help reduce road accidents drastically. 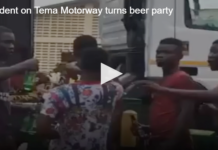