An official of the opposition National Democratic Congress (NDC), who was remanded into police custody for alleged incest and abortion, has been granted bail.

The Communications Officer, Kwesi Dawood, appeared before the Cape Coast High court, Thursday, October 21, after exhausting a week out of his two-week remand.

He is facing four charges; having sex with his biological daughter, defilement – since the abuse began when she was 15 – assault and abortion, but he secured a GHS 30,000 bail for the latter.

He pleaded not guilty to all charges.

His bail comes after the case was heard at the High Court succeeding the initial hearing at the Circuit Court.

The decision by the Circuit Court to remand him into police custody for two weeks has also been overturned as same was unjust.

The High Court has, therefore, ordered his release from police custody.

Present at the court during the ruling was the party’s National Communications Officer, Sammy Gyamfi. 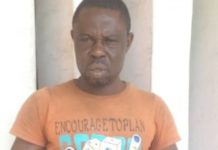