Years after paving way for new artistes with her musical break, legendary songstress Mzbel has returned to snatch her throne.

The musician has released her much-anticipated song, Asibolanga song and Ghanaians have quickly caught the craze of the jam.

The four-minute song has a blend of highlife and Amapiano rhythm and she added a touch of beatboxing.

Mzbel’s latest is a short demonstration of the tactics of modern day women who live fake lives to impress the internet, and those whose luxurious lifestyles are funded by ‘big men’.

Just few hours of it’s release, the song has garnered over 40k views on YouTube accompanied by almost a 1,000 comments.

The song has generated mixed reactions on social media.

While some are going crazy about the song and described it as a banger for the yuletide, others simply cannot look beyond the vulgarity.

They have argued that as an artiste with 18 years experience, Mzbel should know better to promote clean lyrics than one filled with sexually explicit content. 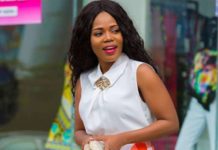