A scuffle broke out between Minority Members of Parliament (MPs) and armed security personnel during a march to the Electoral Commission’s (EC) Headquarters in Accra, Tuesday.

The armed security men stopped the MPs from continuing with their protest.

This, according to the Commander of Operations of the Greater Accra Region, ACP Kwasi Ofori, was because they were not notified of the protest.

Barricades were mounted near the Ridge Roundabout to block the protestors who in turn pulled them down to force their way to their destination.

The lawmakers, who in the spur of the moment, seemed angry begun chanting kill us at the police as they engage in a physical argument. They went on to pull down barricades mounted near the Ridge Roundabout to force their way to their destination to present a petition to the EC.

Mr Iddrisu, addressing the media, accused the EC of disrespecting Ghana’s electoral laws as no official showed up to pick the petition.

“We are demanding justice and re-collation for Techiman South for Christopher Bayire. They did that for the NPP in Banda and we demand the same; it must be done before January 7 so we walk to Parliament with our majority of 138,” he said.

He added: “The Minority will boycott all activities relating to the EC for disrespecting us.”

He vowed they will lay their lives down for the sake of Ghana’s democracy.

This comes on the back of numerous protests staged by supporters of the National Democratic Congress to protest the 2020 election results.

With 137 seats in their favour, the Minority believes they would have possessed more if the election was transparent.

This will be the second march by the Minority under the 7th Parliament after a similar march to the Police Headquarters to demand the arrest of perpetrators of the Ayawaso West Wuogon by-election violence on February 5, 2019. 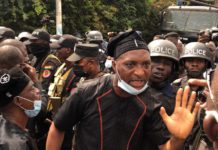