A video circulating on social media has a mentally-challenged woman proving to the world that indeed music is a universal language and knows no barrier as she dances to Stonebwoy’s latest gibberish song dubbed Putuu.

According to some social media users, the video was taken at Obuasi, a well-known mining community in the Ashanti region.

Carrying her belongings in a sack with no sandals on, she imitated the moves of some young men who were playing the song through a mobile speaker at the roadside.

Some passersby, who were amused by what they were witnessing, took out their phones to capture the one-time moment.

Music is a spiritual tool!! 🙏😇💃🏻 It speaks to the soul!, Stonebwoy reacted as he shared the video with his fans. 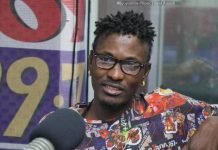