Flagbearer of the National Democratic Congress (NDC), John Dramani Mahama, says he will not incite citizens to destabilise the peace of the country.

According to Mr Mahama, his commitment to leadership is underpinned by the wish to ensure that democratic tenets are adhered to.

“I’m not going to do anything that jeopardises the peace of this country, I’m peace-loving, I’m not going to incite people to go and destroy things, I will not do that,” he stated in an interview with Voice of America (VOA).

The NDC Presidential Candidate emphasised that “we have reached the point in our democracy where we need to establish the principles of our democracy and make sure we uphold them all time.”

Mr Mahama described the just-ended elections as flawed and believes not conceding defeat in the just-ended December 7 polls will make Ghana a better place.

He added: “If my principled objection to a very flawed election and to the circumstances surrounding the environment, will make us re-establish our democratic foundations and create a better foundation for our future, I’m willing to go that route.”

To him, President Akufo-Addo lacks competence in upholding the democratic principles of the country.

“All of the things he has done over the last four years, his misuse of the military services and the national security to threaten journalists, creates a general atmosphere that is unpleasant to our democratic principle,” he said.

Mr Mahama further accused the incumbent government of failing to uphold the true nature of democracy by what he alleged was government’s use of the security agencies to influence decisions in their favour.

“When a President starts to use the military and security agencies to oppress their people, we shouldn’t think they are oppressing just their political opponent but the whole nation,” he said. 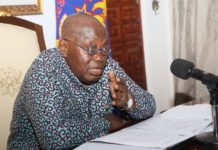