His comment comes after his religion was questioned following a viral video which captured some congregants fighting spiritualities with cutlasses, brooms and other weapons.

Prophet Kumchacha termed the act pure insanity, especially for a congregation that is that large but lacked knowledge.

He encouraged Christians to learn to apply wisdom to their service to God, rather than follow the direction of clueless pastors.

Drama as this, he added, is why Christianity is swiftly fading and the public are having trust issues with religious leaders.

Prophet Kumchacha called for the arrest of the Head Pastor of the unidentified church for wielding a gun in his spiritual warfare. 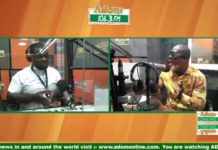