In a video fast circulating on Twitter, one 50-year-old woman identified as Akosua Dufie and few others who were plying a wooden bridge, after rains had poured down, heavily fell into the water.

The wooden bridge had become weak after soaking much of the rainwater that was rushing in full force against the bridge.

At the time, seven people were using the bridge where it collapsed, leaving the helpless woman and a man to fight for their lives in the water.

It is unclear if she died on the spot but in another video, it appeared she drowned from the incident.

Some of the locals were seen recovering her body from the rainwater at another area where the waters were a bit shallow.

According to the Twitter user who goes by the handle, @Sneakernyame_, the woman died by drowning.

Meanwhile, another eyewitness said one of the young guys tried to rescue the 50-year-old, but because of the weight of the woman and the strong current of the rushing water, he was unsuccessful.

The Oforikrom Municipal Director of the National Disaster Management Organisation (NADMO), Awudu Mohammed, said the body of the deceased has since been retrieved.

Check out the videos below: 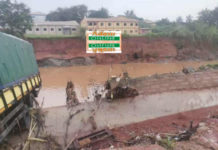