Former Metropolitan Chief Executive of the Kumasi Metropolitan Assembly has proffered solution to the perennial flooding in the Ashanti Regional capital, Kumasi.

Kojo Bonsu suggested periodic desilting of all rivers, big drains and gutters in Kumasi to allow free flow of floodwaters.

The perennial flooding in Kumasi has caused destruction to property worth millions of cedis. Residents blame poor construction and building in waterways for the flood.

Even more disturbing is flooding at Kejetia, the heart of the Garden City. The Kumasi Metropolitan Assembly has served notice it will demolish buildings on waterways.

But Mr Bonsu on Adom FM’s morning show, Dwaso Nsem said the flooding in Kumasi would have been avoided if his successors had followed his plan.

He revealed that, as Mayor, he embarked on massive demolition, desilting of rivers and drains in the metropolis in March and April every year.

“I paid for this because people opposed it. I was branded disrespectful and arrogant because people’s property were affected but that was the price I had to pay to prevent flooding,” he added.

As Mayor of Kumasi, Mr Bonsu said you have to be “ruthless and think outside the box” to be able to succeed.

He charged current KMA Mayor, Sam Pyne to take steps to rid the city of all squatters, slums and illegal structures along water ways if he is determined to prevent recurrence of such avoidable disasters in the metropolis.

He said it worked during his tenure, therefore, it is the only way to prevent such flooding in the Ashanti Regional capital, Kumasi. 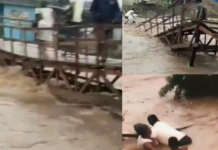