Former President John Mahama has been advised to consider making Member of Parliament for Klottey Korle, Dr Zanetor Rawlings as his running mate ahead of the December polls.

Her choice, according to Member of Parliament for Assin Central, Kennedy Agyapong will bring dignity to the ticket.

Daughter of former President Jerry Rawlings, according to sources, is part of those penciled for the position.

But Mr Agyapong said among all the names being bandied about, the only honourable person among them is Dr Rawlings.

According to him, he has dossiers on all the prospective running mates who played key roles in the erstwhile Mahama administration.

“Apart from Zenator, I have information on all of them. If Mahama chooses one, I will release the information in three days,” he said.

The difficulty in picking a running mate six months to the general election, the Assin Central MP said, exposes the incompetence of Mr Mahama.

Mr Agyapong advised Mr Mahama to consider Dr Rawlings because she will use her charisma and father’s goodwill to make the ticket attractive. 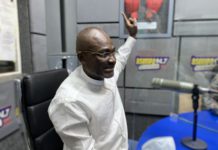