The Ghanaian musician trending for his latest Things Fall Apart song, Kofi Kinaata, says he is double-minded about producing a music album.

Praised for his song writing dexterity and soothing voice, Kofi Kinaata in an interview on Asempa FM’s Ekosii Sen show, monitored by Adomonline.com, said he has no intention of working on an album.

SEE THIS: Adom FM’s ‘Kasahari’ show made me who I am today – Kofi Kinaata

According to him, Ghanaians aren’t album-inclined, hence he isn’t interested in producing so many songs on an album where they wouldn’t patronise.

“Albums discourage me. If people don’t get the message in my song it turns me down. Listen to Samini’s Untamed album and you will realise we are not giving him the attention he deserves.

“The way the fans are, we will keep giving them the singles. There is no indication that the album or songs will sell online,” he said.

The musician, whose fans grow by the day, said he doesn’t believe in awards but rather the impact his songs have on people.

“My songs changing lives is the award. The impact on peoples’ lives is the award because it talks about how well my talent is selling off. Award is good but that shouldn’t be the focus,” he told host Osei Bonsu. 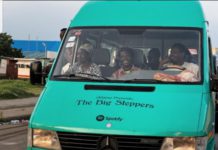