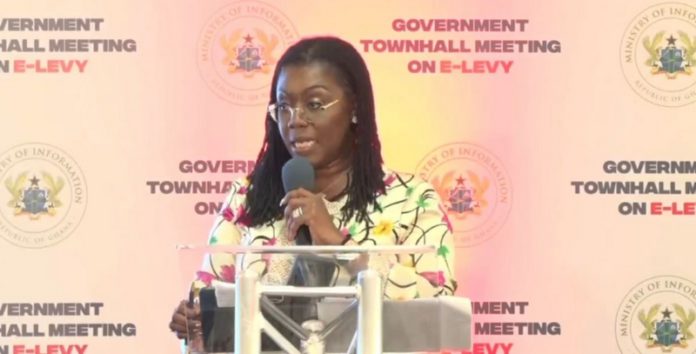 Communications Minister, Mrs Ursula Owusu-Ekuful, is confident that the proposed Electronic Transactions Levy aka E-Levy will improve the fortunes of the country.

She said the success of the Communication Services Tax (CST) makes her optimistic that the country will reap the said gains.

According to the Minister, her initial position against the CST changed when she realised the benefits in the revenue accrued from the CST.

The tax has been the bone of contention since government presented its 2022 Budget statement to the House last year.

But the Minority has also insisted that the 1.75% tax is a tool to exacerbate the plight of the ordinary Ghanaian, which the Covid-19 pandemic has already impacted.

A section of the populace and experts have also greeted the yet-to-be approved levy with disapproval.

But speaking at the government’s first town hall meeting in Koforidua, Mrs Owusu-Ekuful explained that the criticisms will be resolved by the implementation of the proposal.

“Our collective experience shows that despite their initial opposition to many of these interventions [including the CST], they’ve proven to be worth the wait,” she said on Thursday.

She further called for all and sundry to support the proposal to ensure that projects earmarked for the revenue that would accrue from the levy, are executed.

The Ablekuma West MP’s appeal also went to the Minority who has been vehemently opposed to it.

“I appeal to them to cooperate with government and work with us to pass this levy as well, because ultimately, the result that we got from the Communication Services Tax, which clearly didn’t destroy the industry, will also be evident post-implementation of this levy as we all work collectively to enhance access to and use of digital platforms working with Ministry of Finance to ensure that digital financial services become the norm as we strive to become a cash-lite society,” she told the gathering of stakeholders.