The Ghana Revenue Authority (GRA) has hailed the success of the Integrated Customs Management System (ICUMS), which is significantly transforming trade facilitation.

The success of the system includes elimination of the multiple routes prior to payment of duties, seamless processes, increasing revenue, speedy processing of pre-manifest declaration, and undertaking classification and valuation in the same system, among others.

The success of ICUMS has been attributed to the decentralisation of clearance processes from the Customs Technical Services Bureau.

Due to this, GRA exceeded its revenue target in August and November 2020 from the ports despite the negative impact of the coronavirus on the global shipping business.

Assistant Commissioner of Customs in charge of the Accra Sector Command, Mr Emmanuel Ohene said an amount of GH¢1.2 billion is realised monthly since the introduction of ICUMS.

“Tema collection in this month of November has exceeded its target. In August, ICUMS was responsible for the revenue target being exceeded,” he added.

Initial delay in processing BoEs eliminated
Mr Ohene, who is also the chairman of the implementation team of ICUMS, revealed that the initial delay that users of the system faced when processing bills of entry, for example, was now a thing of the past.

“One of the very attractive modules which are being used by about 70% of the freight forwarders is the pre-manifest declaration; it is one of the pillars of trade facilitation agreement from the World Trade Organisation. It allows you to process paperwork and make payment prior to the arrival of the vessel,” he explained.

“In a place like Elubo, where we had a lot of complaints, the decentralisation has taken place. The same as Aflao,” he said.

“There’s a performance management system in the ICUMS which monitors how long one keeps a declaration,” he added.

While admitting to some genuine complaints of the trading public regarding the new system, Mr Ohene insisted that ICUMS was significantly progressive with regard to trade facilitation in Ghana.

He encouraged users of the system to be hopeful as the ICUMS team plans to soon introduce the second phase of the system, which would see the few challenges fixed, as well as many added innovations 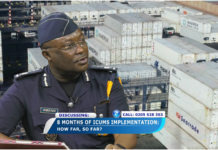 ICUMS not responsible for variance in revenue target