Archbishop Elisha Salifu Amoako, the Founder and Overseer of Alive Chapel International, says he warned Sylvester Ofori, the Ghanaian pastor who shot his wife in the United States of America prior to the unfortunate incident.

The man of God confirmed this in an interview on Adom FM’s Live Worship show where he alleged that Pastor Ofori’s wife, Barbara Tommey, had told him about some doings of her husband which were not on the right path.

They are my children in Orlando. I will show you pics his wife complained… I went there the second time and I told him to be careful, otherwise, he will kill his wife. I know him.

It is what is following him that caused it. People don’t know the man. When Barbara was four years, her mum was sick… I prophesied they will be in America. What is happening is pure witchcraft, he said.

According to him, pastor Ofori was possessed, hence felt remorse after shooting his wife seven times in broad daylight.

It’s calculated. People don’t know what the man went through. They don’t know the voices he was hearing. It doesn’t matter who you are. It can happen to everyone.

The guy was a very good guy. He put me into a seven-star hotel. It is something that has triggered that. The spirit will leave him now that he has served the purpose. There are people who are being tormented by evil spirits and they don’t even know, he noted. 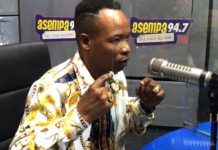