According to Prof Kwamena Ahwoi, the now flagbearer of the opposition National Democratic Congress (NDC) believes it affected the late Mills psychologically.

Mr Rawlings on several instances took on the late President Mills to the cleaners for allegedly failing to act one way on another on issues concerning former appointees of ex-President John Kufuor’s administration.

These innuendos, Prof Ahwoi claimed were a bother to former President Mahama who was the Vice President, to the late President Mills.

“Mahama said President Mills used to complain to him about President Rawlings’ attacks and he had no doubt that the attacks affected President Mills psychologically…,” Prof. Ahwoi wrote in the first paragraph of Page 200 of the book. 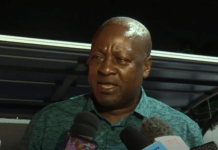