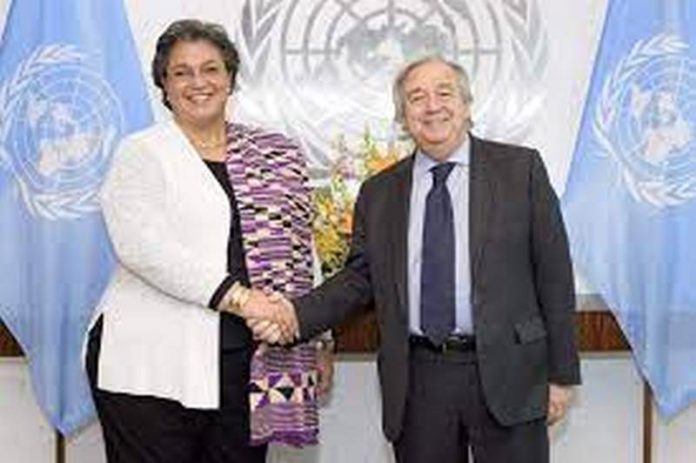 Former Foreign Affairs Minister, Hannah Serwaa Tetteh, has been named by the United Nations Secretary-General António Guterres to be his Special Envoy for the Horn of Africa.

She succeeds Parfait Onanga-Anyanga of Gabon to who the Secretary-General reiterates his deep gratitude and appreciation for his dedicated service.

On the webpage of the United Nations Secretary-General, he stated that Ms. Tetteh “brings to this position decades of experience at the national, regional and international levels, including well-honed skills in building consensus among stakeholders, which will allow her to strengthen the partnership between the United Nations and countries in the Horn of Africa, as well as with the Intergovernmental Authority on Development (IGAD), in the area of peace and security.”

Prior to that, she served as Director-General of the United Nations Office at Nairobi.

She also served in the cabinet of the Government of Ghana as Minister for Foreign Affairs during which time she was also a member of the National Security Council and the Armed Forces Council (2013-2017).

During her term as Minister for Trade and Industry, she was a member of the Government’s economic management team, the board of the Millennium Development Authority and the National Development Planning Commission as well as the Chairperson of the Ghana Free Zones Board.

Ms. Tetteh holds a Bachelor of Laws (LLB) degree from the University of Ghana, Legon.  She was called to the Ghana Bar in 1992.  In addition to English, she is fluent in Hungarian and Fante.