Producer Hammer has shared an old photo of rappers Ayigbe Edem now Edem, Sarkodie and movie actor Chris Attoh to project the importance of being patient in life.

The throwback photo captured the trio in 2010 when they were just up-and-coming industry players at the Ghana Music Awards’ 10th anniversary.

Looking at the photo, Mr Attoh was the host then with young Sarkodie and Edem representing their craft under Hammer’s music record label, The Last Two at the awards ceremony.

Hammer shared the photo with his followers to tell how one must be patient for the right time and moment in life.

He explained that the caption that was given to the photo ignored Sarkodie’s name, thus, Chris Attoh with Ayigbe Edem & co but now it cannot be so because his brand is equally solidified.

His caption read: The first time I took them to the Ghana music awards, star boy was referred to as ‘And co’. Be patient in this life, your time is coming. Good morning! 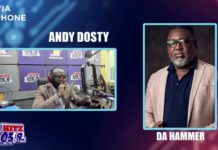