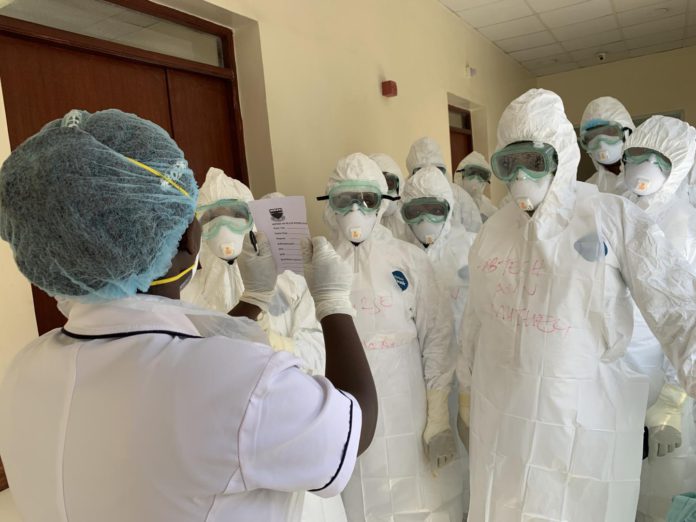 The death toll, remains 139 persons, with 25 others currently in severe conditions, eight in critical states, and four on ventilators.

Dr Badu Sarkodie, the Director, Public Health of the Ghana Health Service (GHS), who gave the statistics said there’s a reduction in the number of active cases from the last update, which was then 4,717 positives.

He advised the public to do more to observe the preventive protocols particularly, social distancing, wearing of nose masks and regular handwashing with soap under running water, to prevent hikes in various areas, and further reduce the number of active cases.

Dr Sarkodie was giving an update on the country’s case count and management of Covid-19, at the Ministry of Information bi-weekly press briefing in Accra on Tuesday.

He said per the data received by the GHS on July 11, 2020, there had been 264 new confirmed cases of COVID-19 infections recorded from 26 districts across six regions since the last update on Thursday, July 09, 2020, and that those were identified through general surveillance and the majority from enhanced contact tracing.

The Director also explained that the majority of those new infections were from the backlog of samples collected between June 23 to July 10, 2020, which were currently being analysed by the various laboratories due to the then challenges they experienced with the shortages of testing kits as explained at the last update.

He gave the distribution of the new cases, saying Greater Accra continued to maintain its high lead with 179 fresh infections from 29 districts, majority of which came from Ayawaso West, with the others including Korle-Klottey, La Dadekotopon, La Nkawntanang, Adentan, Ledzokuku, Accra Metro, Ashaiman and Tema also recording new cases.

The Western Region had 49 new cases from three out of its 14 districts, with the majority coming from Wassa Amanfi, East, while the 18 fresh infections recorded in Ashanti also came from six districts with the highest number from the Kumasi Metropolis, with other areas such as Bosome freno, Atwema Kwahoma, Asokwa, Kwadaso, and Bekwai also recording cases.

Dr Sarkodie said other regions with fresh infections were Eastern Region with 12 cases from three districts with a majority of the infections from Lower Manya Krobo; Oti-five from Krachi West, and Volta-one from Akatsi South.

However, ten regions made up of Central, Upper East, North East, Upper West, Western North, Savannah, Ahafo, Bono, Bono East, and Northern did not record any new cases during the period under review.

He said hotspots continued to remain the coastal and middle belts and advised people living in those communities to be extra vigilant in observing the protocols.

Dr Sarkodie said Greater Accra had a cumulative case count of 13,869 contributing 55 percent of the country’s total confirmed cases of COVID-19, followed by Ashanti with 5,277, which was about 21 percent, while the Western and Central Regions accounted for 8.7 and 4.4 percentages respectively.

He also gave a summary data of recoveries and discharges per region, showing that in Ahafo, a total of 14 persons out of the 38 had been discharged, leaving 84 active cases; Ashanti 4,819 out of the 5,277 recovered (19 active cases).

The Director said other high burden areas were Greater Accra with a total of 13,869 cases, of which 11,327 had recovered, leaving 2,481 active cases; Western region 2,189 of which 2068 recovered leaving 119 persons still active with the virus.