The Ministry of Foreign Affairs and Regional Integration has dismissed reports which suggest a liaison with UK authorities to evacuate migrants.

The Ministry, in a statement, noted the document titled ‘Operation Dead Meat’ suggests plans have been drawn up by the UK authorities to send migrants to Rwanda and Ghana for processing and resettlement.

However, the Ministry says it has not engaged with the UK on any such plan, adding it does not intend to consider any such operation in the future.

“It has come to the attention of the Ministry of Foreign Affairs and Regional Integration that UK newspaper this morning reported details of a document dubbed ‘Operation Dead Meat’, which contains, among other things, a measure supposedly being drawn up by the UK authorities to ‘send migrants to countries such as Rwanda and Ghana for processing and resettlement,” the statement read in part.

The statement added: “It is recalled in this regard that the Ministry on the 8th of September 2021 debunked in a tweet a news item on Sky News UK about a possible Ghana interest in partnership agreement with the UK to host deported or retuned migrants of Third Countries from the UK.”

The Ministry has since assured the government has not changed and has advised that any publication that implies otherwise should be ignored. 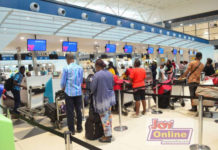