Police in Sunyani have arrested five teenagers who allegedly robbed a taxi driver at gunpoint on the Nsoatre-Berekum highway in the Bono Region.

They have been placed in Police custody, pending further investigations.

According to a Police situational report made available to Adom news, the incident happened on January 7, 2022, at about 2150 hours around the Nsoatre Roman Catholic Church.

The victim (name withheld) was relaxing in his taxi cab, which had developed a mechanical fault when the suspects pulled a locally manufactured pistol and robbed him of his two mobile phones, shaving machine, black polish, and GH¢1,000.

On January 8, 2022, the victim sighted three of the suspects at Nsoatre in the Sunyani West Municipality, raised alarm, and with the support of others managed to arrest and hand over the suspects to the police.

The Police retrieved two mobile phones, Itel and Infinix phones, from the suspects and proceeded with the victims, and had Agyeiwaa and Asare arrested as well.

“Efforts are underway to retrieve the alleged pistol used for the robbery”, the police indicated. 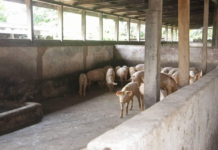