The combined efforts of the police and members of Wassa Appiahkrom and Ayiem communities has led to the arrest of nine robbery suspects.

Police reports explain the gang embarked on two robbery attacks on 7th and 8th January 2022 at Wassa Akropong and Mpohor in the Western Region.

They attacked their victims with an array of weapons including a locally manufactured pistol, cutlasses and a dagger.

They bolted from the crime scenes with various items including a motorbike, mobile phones, and a cash amount of Ghc 2,700.

Suspect Philemon Essien who sustained a gunshot wound on his hand and suspect Emmanuel Yaley who sustained non-gun-shot-related injuries during the arrest were sent to Effia-Nkwanta Regional Hospital where they were admitted for treatment, and are under Police guard.

Items retrieved from the suspects include a cash amount of Ghc 2,200.00, a motorbike, and an Opel taxi with Registration no. WR 3186-14 which have been impounded for further investigation.

The police are on the lookout for two of the suspects who managed to escape.

Meanwhile, the Service has commended community members of Wassa Appiahkrom and Ayiem for supporting the police in effecting the arrests.

“We equally commend the personnel of the Western Regional Command for their patriotic services towards ensuring peace and security in the region.

“Indeed, Police-Community partnership is the master key to crime-fighting. Let us, therefore, continue to work together for safer communities,” the police stated. 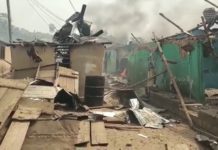