The Minister for Finance, Ken Ofori-Atta is expected to present the budget for the first quarter of 2021 to Parliament on Wednesday, October 28.

The statement will detail the projected revenue and expenditure between January and March next year.

This practice is in accordance with what the Executive does every election year to avoid spending hiccups in case of a transition in government.

Majority Leader and Chairman of Parliament’s Business Committee, Osei Kyei Mensah- Bonsu, who made it known on the floor of the House on Friday, said the budget will ensure that government machinery does not grind to a halt in case there is a change of government.

This means there will not be a conventional budget presentation in November as is associated with election years.

In July this year, Parliament approved an extra GH¢11,896,477,566.00 to support the government’s expenditure after the Mid-Year Budget review and supplementary estimates presented by the Finance Minister.

This was after another approval in November last year, where the House approved GH¢98,36,692,358.00 for the government’s expenditure for the 2020 financial year. 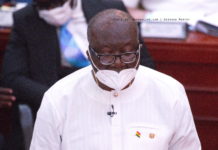