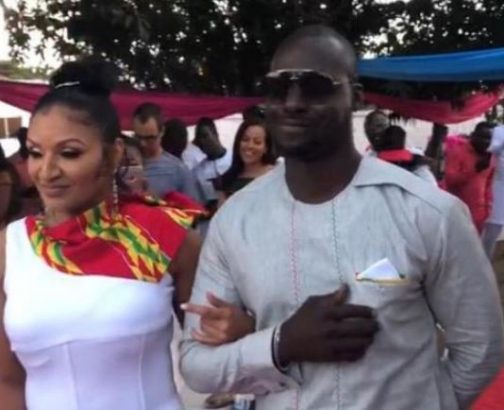 The gruesome murder of Bettie Jenifer, wife of famous Ghanaian actor, Chris Attoh, last Friday has sent shivers down the spine of many Ghanaian residents in Maryland, USA. The sad incident has also attracted mixed reactions about what might have motivated the murder.

While some suspect it could have been a contract killing, others allege the killing could be punishment for Attoh himself over unvoiced infractions.

When Graphic Online visited the scene of the murder 36 hours after the incident, the police had removed their cordon of the crime scene. However, a couple of police patrol vehicles were parked at different spots close to the crime scene. There was no one available immediately to comment.

Meanwhile, the building in which she worked also houses a school where some Ghanaians are undertaking courses in data management.

Although they refused to comment, they could be heard discussing what they thought actually happened.

According to one, she heard the shots and rushed out but all she saw was a car driving away from the scene of the murder. She could not describe the make of the car because it was slightly dark at the time of the incident.

One student who parked close to the scene had to be escorted to her vehicle before she moved for fear of an attack from the unknown assassin.

When contacted, the Ghana Embassy in Washington declined comment on the matter.

“At this point, the Embassy is not going to make any comment on the matter”, an official told Graphic Online in a WhatsApp chat.

Jenifer, an American, was gunned down in the parking lot of Capital Office Park, 6301-6421 Ivy Lane, Maryland. The area shares a compound with Crowne Plaza Hotel and other offices.

The area is well landscaped with many trees which makes it possible for anybody to commit crime a escape.

Bettie was reported to have left the office and was walking to her car when a man armed with a handgun approached her.

When she tried to run away, the man followed her and fired at her multiple times, with at least one shot hitting her.

The gunman then made his escape in a getaway vehicle.

The Maryland Police have declared the killer wanted.

Giving details about the physical appearance of the killer, the police described him as “a black male with a thick build and black hair, wearing a dark shirt and pants.”

Chris Attoh and Bettie Jenifer were married at a private event at North Kaneshie, Accra, Ghana in October 2018. This was 10 months after ending his marriage to DamiloIa Adegbite, a Nigerian actor with whom he has a son.

Last week, Chris Attoh sparked speculation on social media that all was not well with his second marriage after he deleted all of Bettie’s pictures from his social media pages.

It was alleged that they had broken up but neither of the two publicly confirmed or denied the story of a separation.

Chris is believed to be in America but was it not clear whether the police had picked him for questioning.