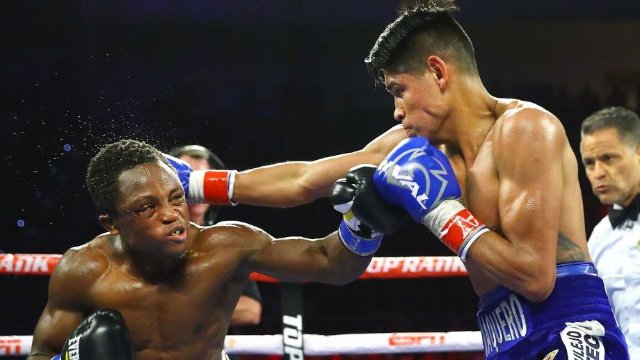 Emanuel Navarrete defeated Isaac Dogboe by TKO in Round 12 to retain his WBO junior featherweight world title — the same belt he won in his first fight against Dogboe in December — at the Tucson Convention Center on Saturday.

While Dogboe was better prepared for the rematch with Navarrete, he simply could not deal with Navarrete’s length, reach and work rate.

From the beginning, Dogboe (20-2, 14 KOs), put up a more spirited effort by crowding Navarrete (27-1, 23 KOs), who at 5-foot-7 enjoyed a 5-inch advantage in height over Dogboe. But Navarrete was more than comfortable on the inside and met the oncoming charges of Dogboe with an array of whipping uppercuts and straight right hands.

Navarrete hurt Dogboe in the second round and just steadily outworked him the rest of the fight. While Dogboe had pockets of success, landing several hard right hands on Navarrete, he was never truly able to hurt him.

Dogboe showed plenty of heart in fighting into the late rounds, but it was obvious that this simply would not be his night against Navarrete, who was able to neutralize the attack of Dogboe.

After going to the canvas in the sixth round from the steady onslaught of Navarrete, Dogboe was staggered again in the ninth round, and in the 11th his knees buckled from a left uppercut as he was in a neutral corner. In the 12th, a final barrage of punches sent Dogboe to the canvas again. His spirit had been willing throughout, but his body had given out by this point and his corner decided to stop the fight.

“It really surprised me that he took so many hard shots, but at the same time, he continued to throw strong punches,” Navarrete said after the fight. “I want to thank Dogboe because he gave me the opportunity to become a world champion, and now in this second fight, he gave me the opportunity to demonstrate that my first triumph wasn’t by accident and that there is a reason why I have the title.

“And to all the fighters at 122 pounds, I tell them that if they want my title, then they can come and try and take it.”

Dogboe expects to continue fighting, just not as a junior featherweight.

“Making super bantamweight is getting too difficult,” Dogboe said. “My next fight, I will be moving up to [featherweight]. I will be much more comfortable there.

“All the credit to Navarrete. I thank him for giving me the opportunity to regain my title. It just didn’t go my way tonight. I will be back at featherweight in a big way.”