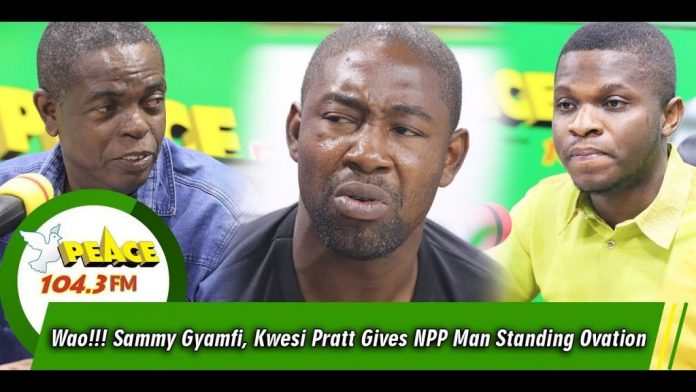 The National Communications Officer for the National
Democratic Congress (NDC), Sammy Gyamfi, has given the Member of Parliament for
Ledzokuku Constituency, Dr Okoe Boye, a standing ovation.

Mr Gyamfi’s standing ovation was in respect of the New
Patriotic Party legislator’s stand on the National Communication Authority’s
closure of Radio Gold and Radio XYZ over the weekend.

Dr Boye, in his submissions on the closure of the two
stations at the studio of Accra-based radio, Peace FM, was critical of the
actions of the Communications authority, saying such actions send wrong
signals.

According to the legislator, a strict application of the
law, which cuts out some people who are perceived to be opponents, can give sympathy
to people who don’t deserve it.

“Radio Gold, once they are critics of this government, when
they go quiet, the signal can be that we’ve silenced them.” He noted.

He noted further that some of the worst crimes committed against
humanity were by the law using Nelson Mandela, JB Danquah and others to
illustrate his point.

The neutral dexterity with which he delivered on the topic,
drew an applause from THE Managing Editor for the Insight newspaper, Kwesi
Pratt Jnr who was also a panelist on the programme while Sammy Gyafi rose from
his seat to applaud the MP.

Radios Gold and XYZ were shut down by the NCA, in the
company of armed police officers, last Thursday afternoon while they were carrying
a press conference by the National Council of Elders of the NDC, live.

The stations were handed letters, detailing the reason
behind the closure and asked to re-apply for fresh licenses if they still
wished to operate as Frequency Modulation (FM) radio stations.

Watch the featured video above for Dr Okoe Boye’s comments and the reactions from Mr Gyamfi and Pratt.