Residents of Akumfi, a suburb of Breman Asikuma of the Central region are in a state of fear after a python was killed in a bedroom.

Reports indicate the python was escaping from the room through its window when residents trooped to the scene and killed it.

Information gathered by Adom News suggests the tenant who occupies the said room had traveled days before the incident occured.

The residents say they suspect the reptile may have been used for ritual purposes because such homes are not dwelling places for such reptiles.

They have since called on the traditional council to, with immediate effect, perform rituals to cleanse the community of any evil.

Man bitten by python while sitting on the toilet 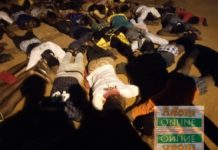