The Sosu Family at Anlo Beach in the Shama District is outraged over the fact that the corpse of their relative, Samuel Nani Sosu, had no tongue when they went for the body for burial.

The family head, Francis Sosu, told Adom News that he contracted a photographer to take photos of the corpse before withdrawing him for pre-burial, five months after he was preserved.

However, when the photos returned, he said they were stunned the tongue of the corpse had been replaced with cotton, though no autopsy was performed on the body.

The family head alleged that no proper explanation was given to them by the morgue, rather, they were welcomed with curses.

Speaking on the issue, some morticians defended that when the corpse was deposited at their outfit on the 7th of April, it had a bad stench emanating from its mouth.

Consequently, they believe that the tongue of the deceased might have either gotten rotten inside his mouth or rolled back into his throat.

The morticians have challenged the family to undertake a private postmortem, pledging to foot the bill if the pathologists find them guilty.

But, the wife of the deceased, Veronica Foroe, has punched holes into their claims, insisting her husband’s tongue was perfect prior to his death and at the moment he was deposited at the morgue.

She explained she was the one taking full care of her bedridden husband and ensured his hygiene, typically oral, was taken care of.

The family has vowed to go extra length, be it spiritual or legal, to ascertain the real issue, as they believe the incident is ritual-related. 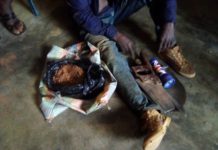