A 30-year-old evangelist has been remanded by a Koforidua Circuit Court in the Eastern Region for allegedly administering locally manufactured cannabis (wee) to his 43-year-old ex-girlfriend.

The accused person, evangelist Samuel Ofosu, resides at Akyem Kukurantumi while the victim (name withheld) is a trader and resides in Koforidua.

The Prosecuting Officer, Chief Inspector Owusu Ababio, told the court that, on August 6, 2021, the accused invited the victim to his house to assist him to prepare for his mother’s funeral.

A few hours later, the evangelist asked the victim if she often suffers headaches which she answered in the affirmative.

He prescribed an alleged herbal drug he bought from Kumasi which he claimed was efficacious for headaches.

A few minutes later, the victim started reacting severely to the side effects of the substances by experiencing nausea and vomiting amidst agitation and anxiety.

She started screaming for help forcing her two children, who were sleeping in a different room, to rush to their mother in an attempt to offer help but the accused screamed at them, chased and locked them in their room.

The accused allegedly locked the door with a password that prevented the victim from leaving the room to seek help.

At about 12:00 midnight, the accused claimed he was taking the victim to the hospital but on reaching the Police snap checkpoint at Kukurantumi, the victim reported to the police her ordeal which caused his arrest.

The victim was rushed to the Community Hospital, Kukurantumi while the accused was detained in police custody.

Police investigators later conducted a search in the accused’s room where some of the edible cannabis candies were retrieved. A substance, suspected to be a narcotic drug, was found in his wardrobe together with different substances in a similar container.

During interrogation, the accused admitted administering three out of four cannabis-infused candies to the victim and also gave her a snuff.

The victim, whose condition deteriorated, was referred to Eastern Regional Hospital in Koforidua but later referred to the Korle-Bu Teaching Hospital for further treatment. 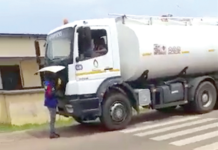